List of names and a name generator for the Elder Scrolls character Dunmer.

If you would like to generate more Dunmer names then click the "Generate Names" button below. Additionally, you can choose the gender of Dunmer names if you wish to do so. 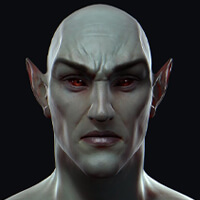 It is referred to as Dark Elves in Tamriel. Dunmers are dark-skinned elves that are originated in the Morrowind province. Most Morrowind natives disdain and have a bitter distrust of other races. They consider themselves superior. Male and female Dunmers have a height the same to most of the human races. A Dunmer is taller compared to their Bosmer cousins but shorter than Altmer.

Dunmer is known as intelligent, strong, aloof, quick, and reserved. However, they are also considered ill-fated by some.

Dunmer has two main cultural groups, the Ashlanders, and the Great Houses.

Ashlanders are direct descendants of the Aldmeri people who follow Veloth, a prophet, into the lands known as Morrowind. They live in small camps, herding guards, mobile huts, and hunting wildlife for hides and meat. This group claims their right to raid settlements and other tribes for slaves and plunder.

The Great Houses originated in the ancient tribes of Velothi. They effectively function as political parties with the polity of Morrowind. The Great Houses have more control over local administration and trade in the province.

The Ashlanders worship Mephala, Boethiah, and Azura. On the other hand, the Great Houses Dunmers worship Tribunal. The Tribunal Temple is dedicated to the worship of Morrowind’s three god-kings called Tribunal.

It is composed of the god-poet Vivec, goddess Almalexia, and Sotha Sil. It was considered the dominant religion in Morrowind until after the Red Year.

What are the strengths and features (skills) of Dunmer?

The Dunmer can resist fire which is beneficial for a similar reason to Breton’s Magic Resistance. Another special ability of Dunmer is Sparks; wherein lightning creates eight shock damage to Health and Magicka per second. Dunmers also have Ancestor’s Wrath special ability, wherein opponents who get too close take eight fire damage per second.

A Dark Elf Woman ruled an empire for a short time

A female Dunmer Katariah Septime ruled Tamriel for 46 years. She became Empress after husband Pelegius Septim III was unable to rule because of his declining mental health.

Dunmer is popular for acquiring natural magical prowess, which can rival the High Elves. They practice necromancy for outsider races only.

The Great Houses govern the Morrowind. They have five powerful families and rule on separate areas of Morrowind.

To sum it up, Dunmers are another character in Elder Scrolls with specific characteristics. Most Dunmers or Dark Elves are now living in Solstheim. They are forced to flee from Vvardenfell due to the eruption of Red Mountain.