List of names and a name generator for the Elder Scrolls character Khajiit.

If you would like to generate more Khajiit names then click the "Generate Names" button below. Additionally, you can choose the gender of Khajiit names if you wish to do so. 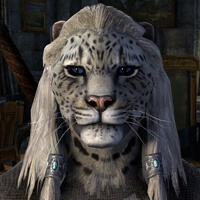 One of the Elder Scrolls series's most iconic races, the Khajit are a cat-like humanoid species known for their love for moon sugar and for always "having coin." The lore behind the Khajit goes far deeper than a first-time players might realize, though; in fact, the story of the Khajit is just as long and sordid as the story of Tamriel itself. From their unique culture and religion to their strained relations with the other races of Tamriel, the Khajit stand out as a complex, fully-fleshed race for the curious player willing to do the research.

The Khajit are, in general, a beastial race whose appearance falls somewhere between a human and a feline. The exact form a Khajit takes is not set in stone, however, and whether a specific Khajit more resembles a a cat, a man, or a mix of the two is not a simple process. In reality, as many as 20 breeds of Khajit exist in the Elder Scrolls universe, each presenting with a unique set of features. Unlike other racial groups, where an individuals traits are primarily influenced by maternal characteristics, details like a Khajit's breed are determined by the cycles of the moons Masser, Secunda, and a mysterious third moon yet to be identified.

Given the array of features each breed presents with, it is difficult to establish the appearance of standard Khajiti character. Depending on the Elder Scrolls game, Khajit may take on the appearance of small housecats named Alfiq, Bosmer-esque humanoids called Ohmes, or at least a dozen other forms for fans to discover.

Given their feline acrobatics, Khajit characters are proficient in stealth skills, letting them move through the shadows unnoticed by foes. Sharp claws and strong bodies allow these characters to fight and defend themselves well, even without a weapon equipped, further exploiting their ability to sneak. For players hoping to take the stealthy approach to their Elder Scrolls quests, a Khajit is an ideal choice well worth consideration.

While most of the races of Tamriel have stories of migration to their current homeland, Khajit appear to have been residing on the continent for as long as they have lived. Organized into tribes led by a Clan Mother, many Khajit lived and continue to live nomadic lives all across the continent - although, in modern day, most Khajit clans remain in the south-eastern regions of Tamriel on account of poor relations with the other races.

Many races throughout Tamriel are noted to be distrustful of the Khajit, both on account of their bestial form and stereotypes regarding their shady lifestyle. Even the Argonians, another bestial race on the continent, have harbored animosity towards the Khajit for as long as anyone can remember. It is appropriate then that, in the Elder Scrolls Online, the Khajit are aligned with the Aldmeri Dominion alongside the Bosmer and Altmer, placing them opposite the Argonians, Nords, and their other more distrustful foes.

Historically, the Khajit have been viewed by those of Tamriel as crooks and beasts. In truth, though, this ancient race boasts a deep history, and complex system of religion and culture, and a society well worth exploration. Though much about the lives of the Khajit remain a mystery to Elder Scrolls fans, a player would be remiss never to relax with a Khajiti caravan and listen to their stories of conquest and exploration - especially if that player was in possession of wares worth selling.