List of names and a name generator for the Elder Scrolls character Nord.

If you would like to generate more Nord names then click the "Generate Names" button below. Additionally, you can choose the gender of Nord names if you wish to do so. 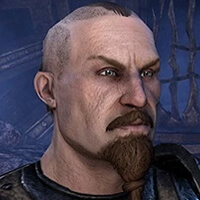 Nord is a child of the sky, a race of fair-haired and tall humans from Skyrim, famous for their excellent resistance to magic frost and cold. Nords highly value community and family.

A Nord is a strong, fierce, and enthusiastic warrior. There are many Nords who became renowned soldiers, warriors, and mercenaries in Tamriel. Aside from their martial skills, they also stand out in warfare. They are popular as militant individuals by their neighbors. Nords also have nautical prowess as they migrate from Atmora. They can also be stubborn sometimes.

Nords are fair-haired and physically strong. They have strong resistance to cold, tall, and pale-skinned humans from Atmora.

Nords are devout people that have grim religious beliefs. They believe that the World-Eater Alduin would return and bring the end of the world. Even though some view their belief systems as dark, Nordic traditions extend a shining and bright hope for Nords. Nordic religion focuses on the Aedra and Lorkhan, their old ally.

What are the strengths and features (skills) of Nord?

Different classes of Nords are skilled in different armor styles and weapons. Nords face battle cheerfully with an ecstatic ferocity which appalls and shocks their enemies. They have natural combat abilities, which is beneficial even for inexperienced players.

Their racial skills include Robust, which increases health regeneration during combat. They can gain with the Two-Handed Weapons skill line. Another special skill of Nords is Rugged that increases armor.

The following are some fun facts about Nords.

Nords are used to be slaves to dragons

In the Late Merethic Era in Tamriel, Dragon used to rule over humans. The Atmorans worshiped animal spirits and believed that Dragons were the strongest. The World-Eater Alduin was the leader of Dragons and claimed himself as a god.

Nords love arts almost as much as fighting

Aside from loving a good fight, Nords also love arts, including writing, music, and poetry. They value the art of speech and become bards to sing at inns and taverns.

Apart from being a warrior race, they are very superstitious. The names of Nords are chosen by omens and given at a special ceremony when the child is young.

Nords conquered most of the Northern Tamriel at one time

After wars with the Dragons and Snow Elves, Nords conquered the surrounding lands.

A Nord child ended the war with the Snow Elves

The Snow Prince, the Snow Elves ruler, fought in the battle and slew Nord warriors. Among the warriors was Jofrior, who was slain in front of her 12 years old daughter Finna. Seeing her mother killed, she picked up the fallen sword of her mother and threw it at the Snow Prince.

Nords are among the best characters in the Elder Scrolls. They have essential skills that make them worth playing in Elder Scrolls Online. They are natural-born warriors who terrify their enemies.