List of names and a name generator for the Elder Scrolls character Redguard.

If you would like to generate more Redguard names then click the "Generate Names" button below. Additionally, you can choose the gender of Redguard names if you wish to do so. 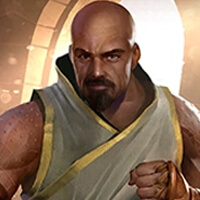 The Redguard is a human race who hail from the lost continent of Yokuda and now primarily lives in the Hammerfell province. Even Redguard is an official Yokudan, and this character gets its current name through ‘Ra Gada,’ a term for corruption of the native Yokudan. It means warrior wave. With their swift and decisive conquest of Hammerfell, Redguard is famous as a naturally gifted warrior in Tamriel.

The Redguard is versatile and ferocious. They are effective scouts and have innate agility. Redguards also have high endurance levels that make them stand out in any activity that requires sustained effort, especially in a combat.

Redguards are average in height. They have a tough and muscled physique. Their skin tone ranges from light brown and black.

Redguard hair texture ranges from wavy and thick to tightly curled and wiry. One unique feature of this character is that they are blessed with a hardy constitution that enables them to resist poison. They can tolerate the heat of the desert.

Religion and Culture of a Redguard

The culture of Redguard is martial in nature. Every child, woman, and man is schooled in the art of war. Redguards combat even at an early age. It is the reason why they are undefeated by invading forces ever since they arrived in Tamriel.

The Redguard is capable of placing differences aside for the sake of their culture and lives. They also have an affinity for horses with breeds like Yokudan charger. Their clothing is diverse and differs based on the district they live.

Features and Strengths (Skills) of Redguard

The Redguards are blessed with resistance to poison, hardy constitutions, and quickness of foot. They can survive in dry, hot climates. Redguards also have a focus on fast stamina regeneration, shield abilities, and improved One Hand skill. They have the unparalleled ability in martial combat.

Redguards have a strong dislike for magic

A Redguard is a proud warrior who chooses to use weapons like swords. They see those using magic as evil or weak.

Redguards have never been truly defeated by the invading forces

Since Redguards have a martial lifestyle, they have been undefeated by any invading forces.

Redguards are newcomers in Tamriel than other races

Redguards are a new race in Tamriel compared to other races. Even though they’re new, they announced themselves as brutal warriors.

They wiped out a whole continent

Redguards are at war with another race that resides at Yokuda. They wiped out an entire continent where the race Sinistral Elves or Lefthanded Elves live.

Redguards are among the in the Elder Scrolls series’ greatest characters. They are tough and excellent in martial combat. All Redguards are expected to learn how to fight. They are strong and proud warriors.