List of names and a name generator for the Elder Scrolls character Ayleid.

If you would like to generate more Ayleid names then click the "Generate Names" button below. Additionally, you can choose the gender of Ayleid names if you wish to do so. 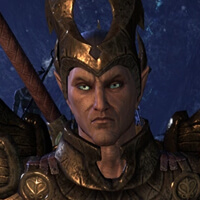 The Ayleids are also popular as Heartland High Elves, Wild Elves, and Saliache. It is a race of elves who ruled the Cyrodiil during the first era.

This race believed that the world comprises four elements: water, earth, air, and light. These elements are also the same in the religion of the Altmer.

The Ayleid is famous for its magical prowess. They acquire a unique magic type called the Aetherial Magic. The Ayleids are considered the cruelest race in Tamriel. They worship both the Daedra and Aedra.

The appearance of Ayleids is lighter compared to the Dunmer but not as pale as the Altmer. The skin tone of an Ayleid ranges from bronze to light tan. They have pointed ears and have a lean and thin body. Ayleids have angular facial features.

The architecture of the Ayleid is similar to the Altmer because of their shared ancestor. Meanwhile, cultural changes are more apparent during the late-Ayleid period—the Ayleids practice flesh-sculpting.

The Ayleids use globes, lamps, fountains, and pools of purest magic for lighting their halls. They replace fire with light since they consider fire a corrupt and weak form of light. Their religion involves worship for Daedra and Aedra.

What are the strengths and features (skills) of Ayleid?

The Ayleid has excellent magical skills that allow them to store and manipulate starlight. They store the starlight to the Varla and Welkynd Stones. The Varla Stones can restore enchantments, while the Welkynd Stones are used as lights or storing magic. These stones can also store destruction magic.

Their major skills include Enchanting, Destruction, Alteration, and Conjuration. On the other hand, the minor skills of Ayleids include Light Armor, One-Handed, Restoration, and Smithing.

The following are some fun facts about Ayleid.

They built the Imperial City and White-Gold Tower

Ayleids possess a unique type of magic called Aetherial Magic. It helps them to control and store starlight.

One Ayleid made two dangerous artifacts

King Anumaril created two dangerous artifacts in Tamriel. He is also responsible for making the Staff of Towers.

A group of Ayleids lived in the Black Marsh

Most of the Ayleids were killed on the Alessian Slave Rebellion

Alessia, a slave to Daedra-worshipping Ayleids, prayed to Akatosh, the Dragon God of Time, to help free her people. The Alessian Slave Rebellion started, and most of the Ayleids were killed.

Ayleids are favored by Meridia

The Ayleids worship Meridia. Meridia favors Ayleids. It is said that the favorite warrior of Meridia was Umaril the Unfeathered.

The Ayleids are among the top characters in the Elder Scrolls series with magical prowess.