List of names and a name generator for the Elder Scrolls character Breton.

If you would like to generate more Breton names then click the "Generate Names" button below. Additionally, you can choose the gender of Breton names if you wish to do so. 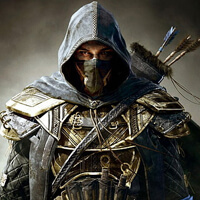 Breton is a race in Elder Scrolls Online. Breton is a leader of the Daggerfall Covenant faction. Bretons also come with magical properties. They are residents of High Rock province. Breton is the result of the interbreeding of the Direnni Dynasty, who lived in High Rock and the local Nede population.

Bretons are a race of men with a strong affinity for magic. They share the same language and culture but are politically divided. With their mixed heritage, they are sometimes called the mongrel race.

Breton is willful, highly intelligent, and has an outgoing personality. Since they intermingled with elven blood, they have a magic affinity. Bretons are also considered gallant cavaliers, shrewd merchants, and inventive wizards. A Breton can also be quarrelsome and proud.

Bretons have pale skin and have a slight human appearance. They are less muscular compared to Redguards and Nords. Bretons are also tall people.

The culture of Breton operates under the feudal system, which was inherited from previous Direnni overlords. Meanwhile, the faith of Bretons is loosely held, and their religious moderation roused them to war in the First Era against the Alessian Order.

Strengths and features of Breton

Bretons are talented craftsmen, flamboyant, passionate, and resourceful. The Breton is also known for its proficiency in abstract thinking. They have a perceptive and quick grasp of enchantment, spellcraft, and alchemy.

Even the humblest Bretons can boast a high level of resistance to dominating and destructive magical energies. The racial skills of Breton are gained if you increase their Character Level. Each Race has its skills set, which makes them unique and suit for specific roles and builds.

If you want to use Breton, you can look for: Daggerfall Style and Breton Style.

Breton comes with a heavy focus on Magicka. They are very good at making Magicka-based DPS or Healers. With their Magicka abilities with Magicka recovery, allow them to DPS or Heal longer before using a Heavy Attack or Potion to regain Magicka. Bretons also have Spell Resistance that keeps them alive longer.

The following are some fun facts about Breton. The Breton race takes inspiration from the real life natives of the Northwestern France’s Armoric Peninsula, Celtic Bretons. In Daggerfall, a Breton worships a god called Ebonarm, who is among the Yokudan divinities.

Generally, Breton is among the famous characters in Elder Scrolls. It has specific characteristics and skills, making it a unique character to play on.