List of names and a name generator for the Dungeons and Dragons character Yuan-Ti. 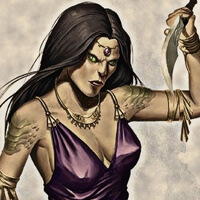 The yuan-ti are snake people in the Dungeons and Dragons universe. They can be found in many different parts of the world, but their origins are unknown. Yuan-ti often worship gods like Dendar and Sseth, who grant them powers that improve their combat abilities. There is much to learn about these evil creatures!

Yuan-ti are sentient humanoids with snake features, such as tails and scales. They have a chaotic evil alignment most of the time. In specific game settings, the yuan-ti are descended from wicked human cultists who crossed their bloodlines with serpent bloodlines. They have mighty psychic powers. Yuan-ti have their language and can also communicate in Common, Draconic, and Abyssal. The yuan-ti are divided into many castes or breeds. The three most common, as detailed in the Monster Manual Third Edition, are as follows:

1) Purebloods resemble humans, with slight reptile characteristics such as slitted eyes, a forked tongue, or scale patches on their skin. They act as ambassadors and infiltrators while posing as humans.

2) Halfbloods are humanoid in appearance but have a broad range of visible serpentine characteristics. These include a snakelike tail instead of legs, a complete covering of scales, a cobra-like hood, a snake's head, or snakes in place of limbs. Halfbloods work as soldiers and temple aides. They are also known as Malisons.

3) Abominations resemble snakes nearly entirely, with just a few human characteristics such as limbs or a humanoid head. They are the most revered members of yuan-ti society, acting as clergy and other positions of influence.

The yuan-ti loved to live in tropical forests. Yuan-ti are also known as vrael olo (which means "favoured ones"). The shorter "vrael" is often used in everyday speech. Still, it can also be changed to "auvrael" (indicating friendly or well-known yuan-ti) and "duthrael" (unfriendly or unfamiliar yuan-ti). The greater a yuan-rank ti's in yuan-ti society, the more winding characteristics it exhibits. Abominations rule their civilization, followed by half-bloods and then purebloods. Yuan-ti are ranked among their subraces based on their achievements and shown favour with Sseth.

During the battle, the yuan-ti used their superior intelligence to create traps and effectively use their environment. They preferred ambushes over frontal strikes. They sent their least valued members ahead first in groups, which meant that purebloods progressed before half-bloods, who advanced before abominations. Yuan-ti was a fan of bladed weaponry. Slow-acting poisons were employed in their complex traps but not on their swords. Yuan-Ti Purebloods are insanely powerful, with far more power than most other races. Yuan-ti abominations, on the other hand, have a high level of intelligence. They will issue orders to their teammates, instructing them on which places to assault or defend and which opponents to prioritize. Because all yuan-ti are magically resistant, they will not prioritize spellcasters as other intelligent foes would.

Take a look at our other Dungeons and Dragons name generators.

Dungeons & Dragons is a fantasy role-playing game, which takes you and your friends to the realms of battles and wizardry. Dungeons & Dragons, as the most popular tabletop game in the world, is driven by the creative minds of the players, where the only limitation is ones' imagination.

Players can create their personal characters and determine their abilities, which affects how they deal with creatures they might encounter while adventuring through the wondrous worlds.

When playing Dungeons & Dragons, one must not worry about winning or losing. The game has no general end, since campaigns - a storyline or set of adventures, could continue indefinitely. Therefore, a game could be going on for months or even years, leaving the players with an option to meet up whenever they like and take up the adventure where they left off. Even though the group might fall in the battles with invincible creatures, there can be no losers in the game. All players are considered winners, as long as everyone had fun creating unforgettable storylines and enduring experiences.

Considering that Dungeons & Dragons is a role-playing game, each player lies with a task to truly embody the character they are playing. The character that each player chooses, forms the essence of the game for them. To start off the character creation, it is wise for a player to acknowledge which kind of adventurer they want to portray. Considering this, a player should choose themselves a race, for example, a dwarf or a gnome, which is followed by a class, like a fighter or a barbarian. Each race has its own strengths and weaknesses, as well as racial traits.

Every player has the chance to demonstrate their imagination by choosing the name for their character. This might very well be one of the most important decisions one has to make in regards to the adventurer they like to portray. In D&D, the name gives other players an idea about the character's background, personality, and intentions. So selecting a name should not be taken lightly.

In this regard, we have wandered around uncountable realms, collecting information about Dungeons & Dragons naming conventions. Our mission is to lend a helping hand to players, when choosing the perfect D&D names feel overwhelming.

We have created over 60 Dungeons & Dragons name generators to cover both, player controlled and Dungeon Master controlled races and characters. With our D&D name generators, you can rest assured that you will find a name for your character that feels and suits them perfectly. All of our names are randomly generated, taking into account each race's traditions and naming conventions, so there is an infinite number of totally unique names that you may generate.

Our Dungeons & Dragons name generators allow you to choose whether you would like to generate male, female, unisex, or clan names, if the race is known to have gender-specified names traditionally.

Some races that place value on family and traditions are generally known to hold last names. In that regard, where appropriate, our D&D name generators provide your characters with both first and last names.

We hope that you encounter endless adventures, carrying a name that echoes in the realms of Dungeons & Dragons!